This time last week I was just about to jump into the foyer remodel.Â  I was picking up the paint + supplies, removing everything from the space, and getting the walls prepped.

A color was chosen.Â  The walls were spackled, sanded, and painted.Â  Then last the stripes were added.

I am actually really impressed with myself on how straight the stripes turned out.

Here is the result… 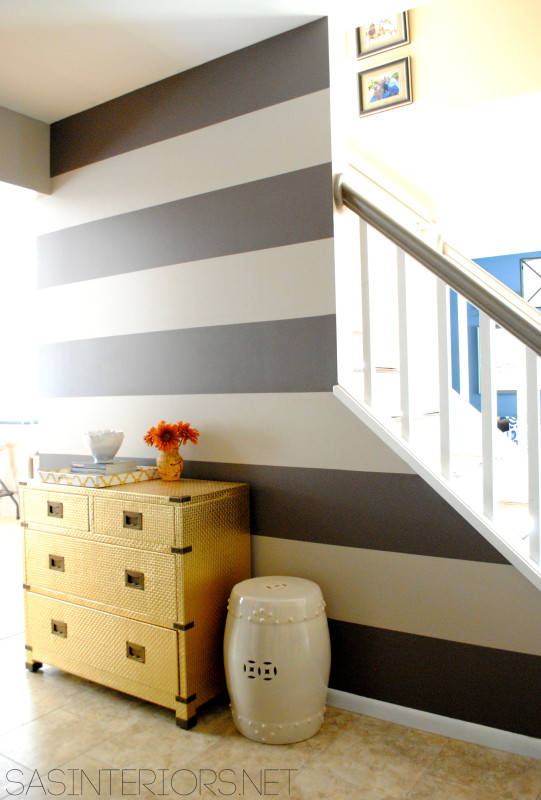 Now a week later, other than the styling + accessories, the space is complete. {big sigh of relief}…

But taking a step back, I learned alot about painting stripes.Â  There are many tutorials out there – I’m sure if you google it, you will find plenty -Â  and instead of giving you a step-by-step, I thought I’d simply give you the 411 on what worked and why.Â  Ready for it???

The # of stripes.Â  Start out by determining how wide + how many stripes you want on the wall.Â Â  I wanted to go wide (somewhere between 10-12″ wide) + I wanted an odd number of dark stripes (for some reason odd numbered things appeal to the eye better), so I created a simple drawing of my wall.

Are you with me?Â Â 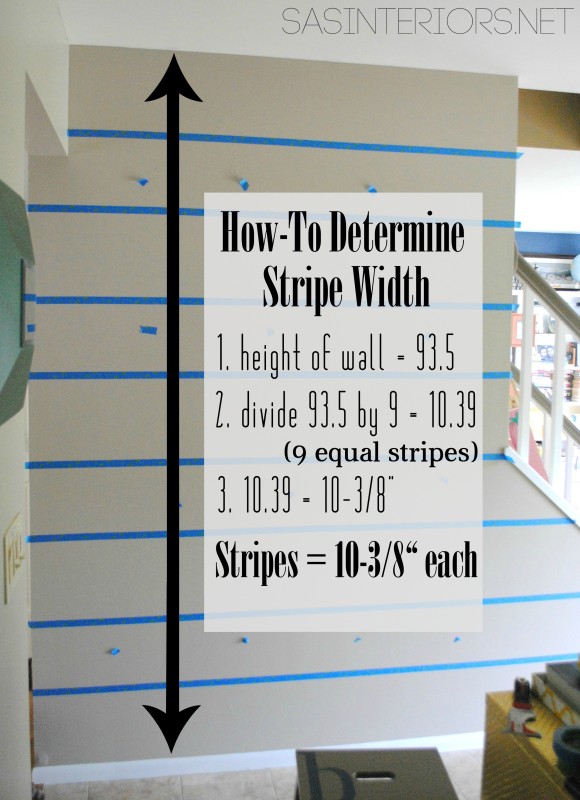 I hope I didn’t lose you. Stick with me.

So you got your stripe width figured out.

The next step is to make the stripes.Â  I went with the simplest technique for creating the stripes No nifty gadgets or gizmos were used, but instead just an ordinary, everyday tape measure.Â  Yup, I’ve got about a half dozen lying around.

Starting at the ceiling (that’s key – don’t start from the floor), I measured down about 10-3/8″ and made a mark with my pencil about every 20″ across the wall.

Then I connected the dots.Â  I lined up the tape with the first dot at the left wall edge, then continued across the wall meeting each dot.Â  It was fairly simple.Â  Once the tape was in place, I checked that the tape read 10-3/8″ all the way across. 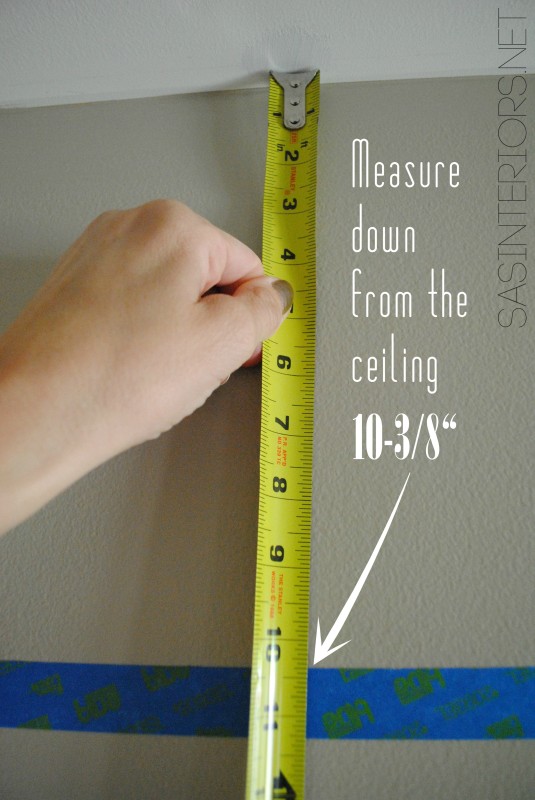 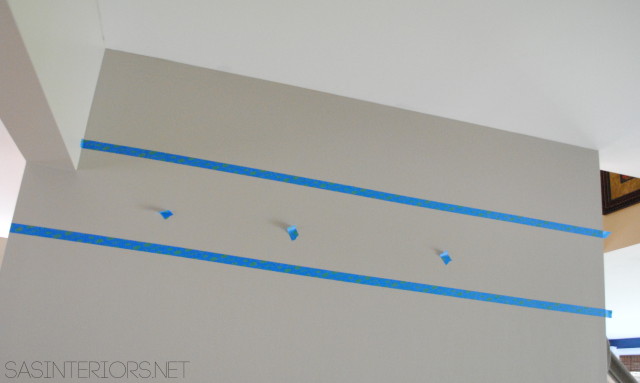 For this project, I used 3M painters tape.Â  I’ve used it before when painting the stripes in my son’s room & I have also tried FrogTape when creating the chalkboard wall for the CCC.Â  To be honest, I feel both are equal.Â  Both have a magical “formula” to keep the paint from supposedly seeping under the tape.Â  I don’t think that it works incredibly (but I have a another trick for that), so overall, I don’t prefer one more over the other.Â  Both do the job.Â  But, I will say, don’t cheap out (like I have in the past) and buy a generic painters tape.Â  IT. WON’T. STICK. TO. THE. WALL.Â  Go with the good stuff… 3M or Frogtape!

So this is the best trick of ALL!!Â  The true way to achieving the most crisp, perfect striped lines with NO SEEPAGE under the tape is to “seal it”.Â  It sounds harder than it is.Â  After you’ve painted, use a brush to paint over the tape edge on the side you plan on painting the striped color (on my wall it was the dark color). Â  READ: ***Don’t paint the edge of the tape that is staying the background color because you will get a line after the tape is removed.

Then “burnish” (push hard) the tape into the wall so it makes a good seal.

To help with remembering which side was which, I added a small piece of tape to the stripes that weren’t changing…Â  the background color. 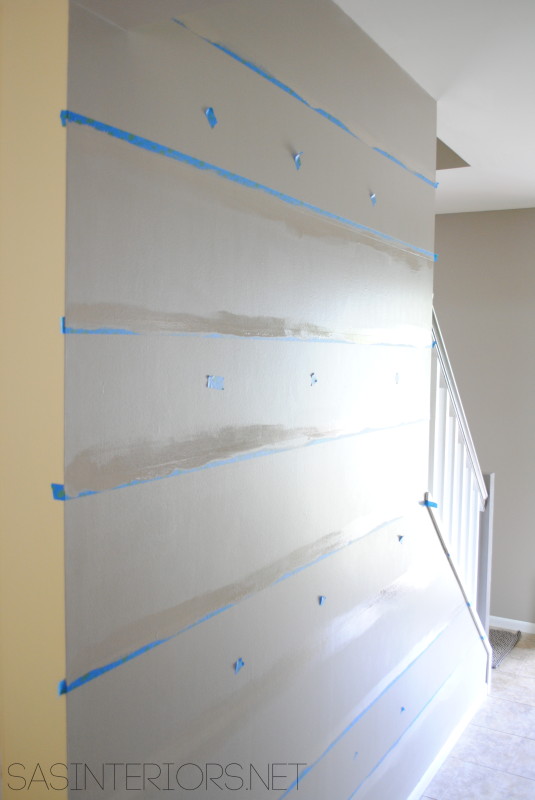 Then came the paint.Â  I’m sure you know how to do that.Â  No trick there… 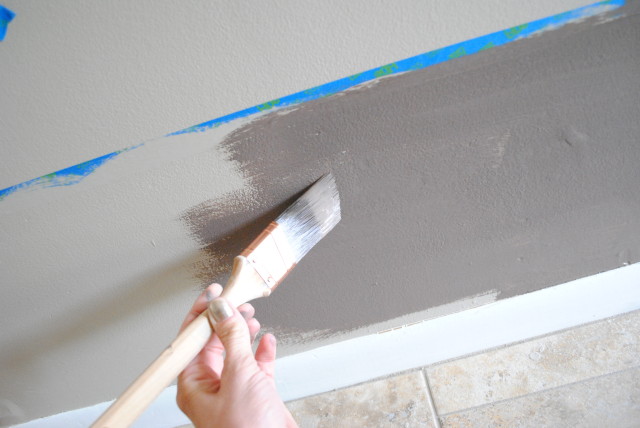 After the second coat of paint remove the tape.Â  Yes, while the paint is still wet. 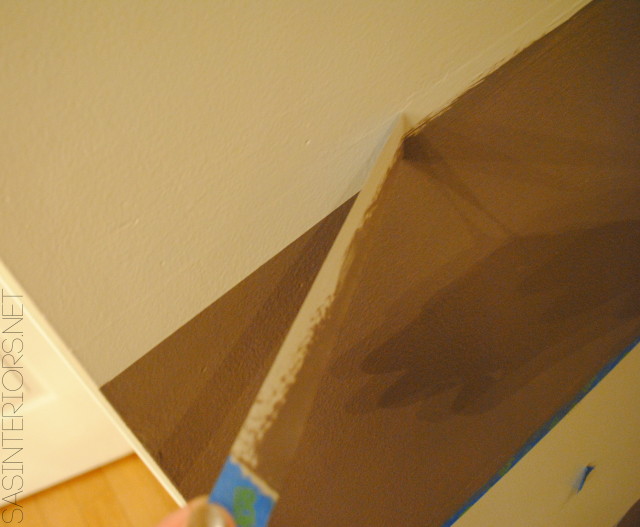 sorry for the mucky picture, it was late at night when I took these pictures.

And you’re done.Â  Those are the 4 easy tricks + tips I have for painting stripes on walls. 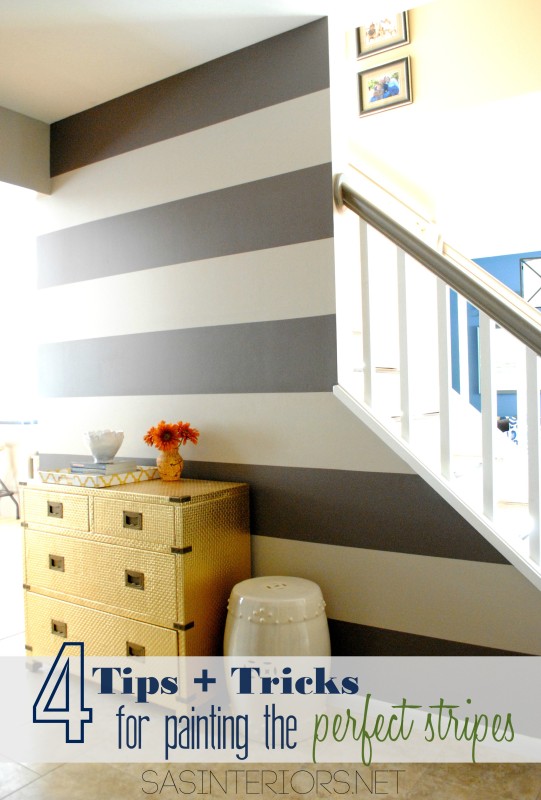 Fairly manageable, right?Â  So do you think you would try stripes now?

Have you ever seen the stripes I painted onto window curtain panels?Â  They are still my most favorite curtain panel to date… 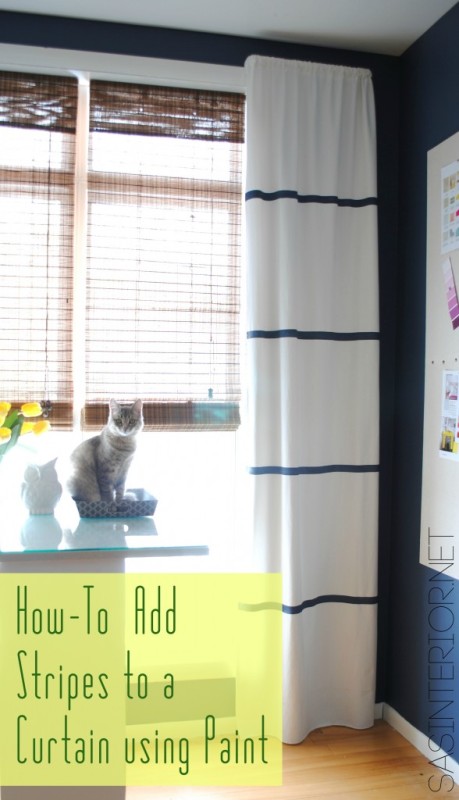 Anyway, let’s get back to my foyer.Â  Want to see more pictures of the crisp, straight, and incredibly perfect lines? 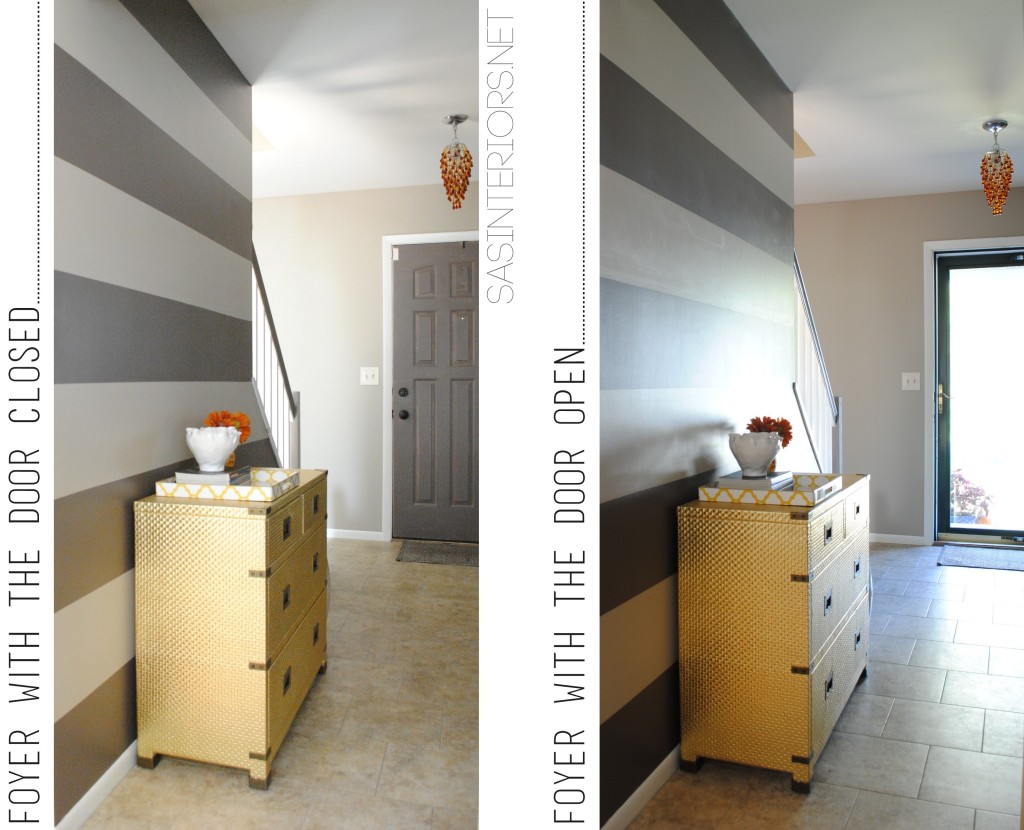 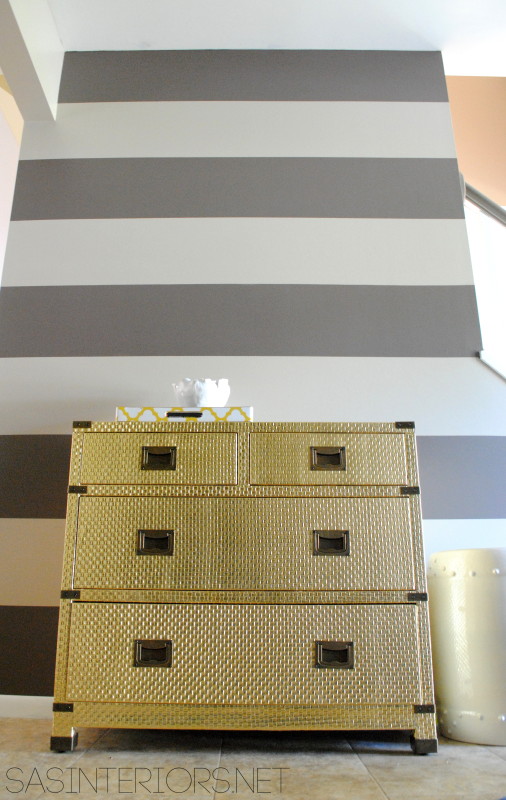 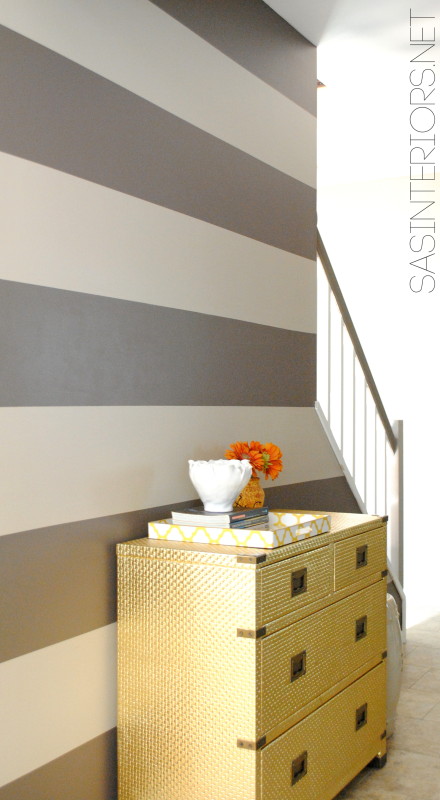 And there you have it.Â  The crispest lines you’ve ever seen and it was so easy. Are you ready to paint stripes on your walls?Â  I’m thrilled with the result.

I have a few things I just ordered to finish up this space.Â  Here’s a peak… 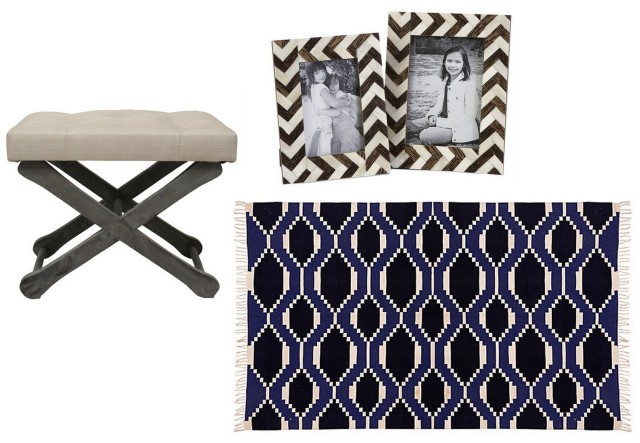 With the new gold gorgeousness, a.k.a. the new gold dresser, these new elements are going to be just right to finish up the space.

Once they arrive, I will share the big reveal.Â  Until then, be sure to get your stripe on this weekend.

Where are you going to add stripes?Â  Do you have stripes in your home already?