I hope you’re having a wonderful week so far.Â  Now that I’m coming off my amazing moment high and getting back into my DIY groove, I’m excited to show you the new stenciled shower curtain panel that I recently made for the kids bathroom.

You may have seen a sneak peak of the shower curtain a few weeks ago when I shared some Spring updates.Â  A few of you even commented saying you loved the color choice (I do too). 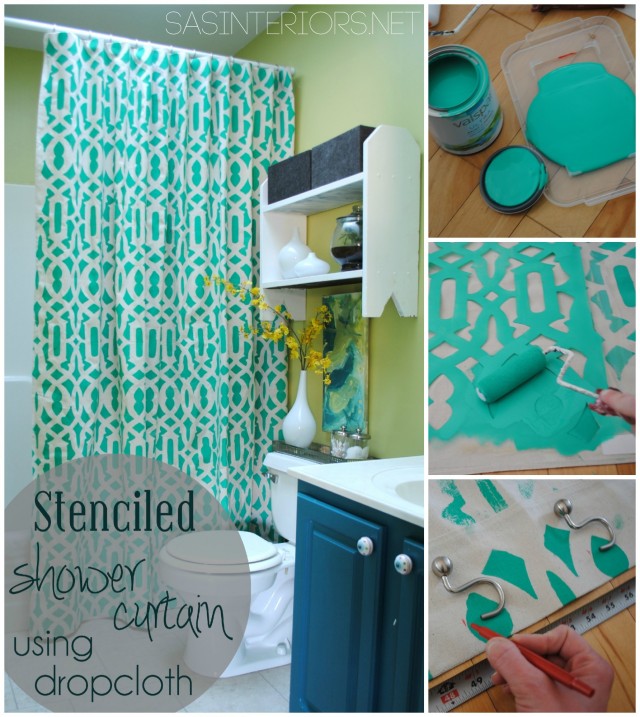 …And I made it myself.Â  It was super easy, inexpensive, and something you can absolutely do too!

The materials I started off with were:

Before I begin, here’s my beef with the typical store bought shower curtains…Â

Every shower curtain on the market is 72″ x 72″.Â  I like my shower curtains to sit just slightly above the floor, but then there is SO much space left above the curtain area, so it looks strange and you can see the showerhead.Â  You know how I feel about window panels being placed as high as they can go, well I feel the same with shower curtains.Â  When I redid my master bathroom, I ended up using two curtain panels to create a shower curtain.Â  It was an awesome solution! Since the panels were taller than a typical shower curtain, they heightened the space allowing the room to feel much larger.

That being said, this DIY drop cloth shower curtain is 7′ tall; much higher than the norm and there is only about 12″ from the top of the panel to the ceiling plane versus 24″+.

NOW, let’s begin.Â  Here’s how I made this dynamic shower curtain…

1. The canvas drop cloth size I found at Lowe’s was the perfect size (6′ x 9′), so there was essentially no trimming needed.Â  I started off by laying out the large panel on a flat surface – my kitchen /dining area is a large open space and is the ideal spot for big projects.Â

I placed the stencil in the upper corner of the drop cloth and secured it with painters tape. 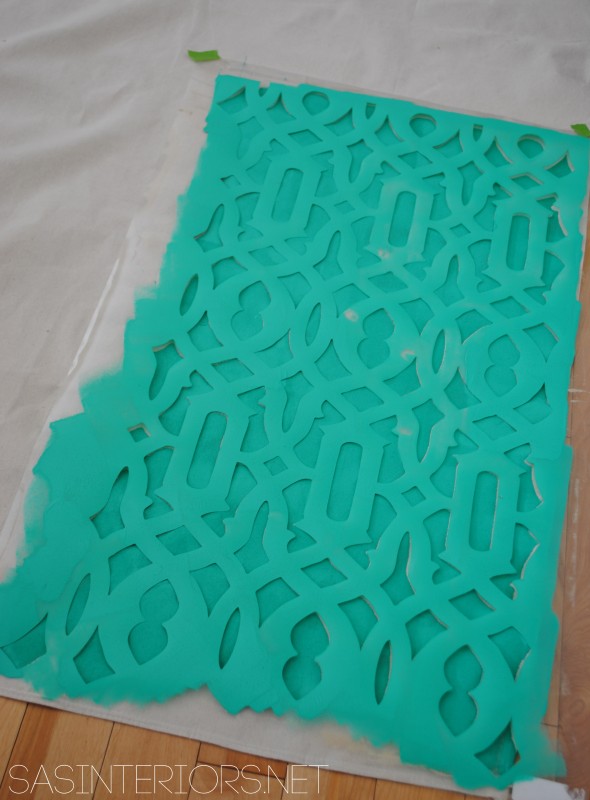 2. Using the vibrant Emerald color and a foam roller, I carefully rolled the color over the stencil putting enough pressure on the roller so the paint adhered to the fabric, but not too much so the paint seeped under the stencil.Â  Believe me, up close it’s not perfect. 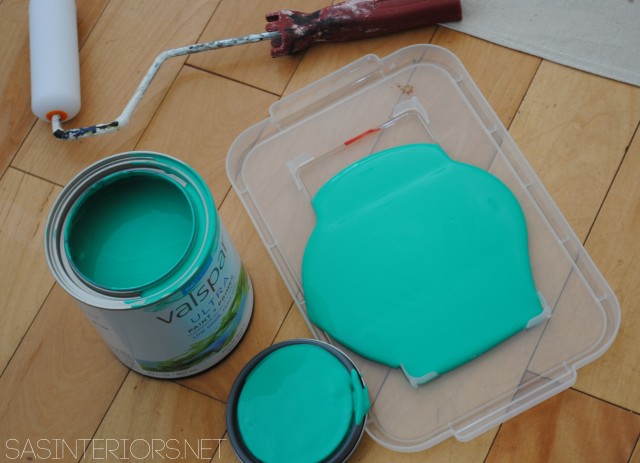 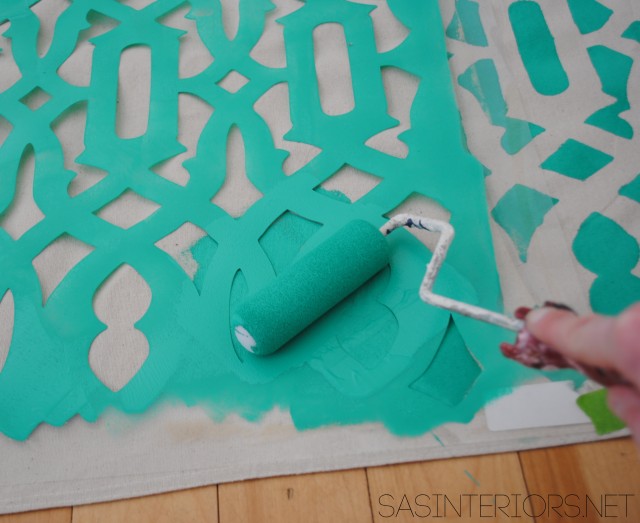 3. Once the first section was done, I waited about 1-2 minutes and then carefully lifted the stencil and positioned it in the right place next to the previously painted area.Â  The Cutting Edge Stencils designs are awesome because they create each of the stencils so it easily matches up as you move it along your painting surface. 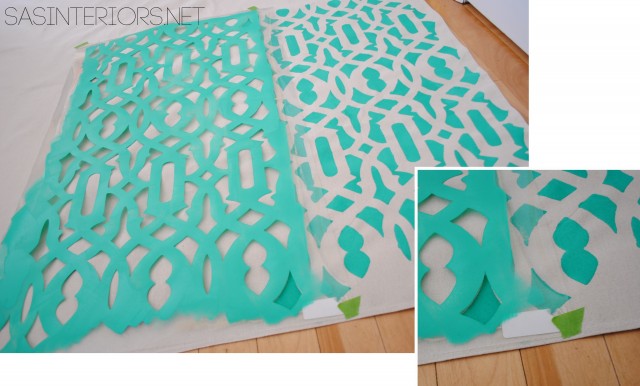 4. I worked my way across and down. And then… 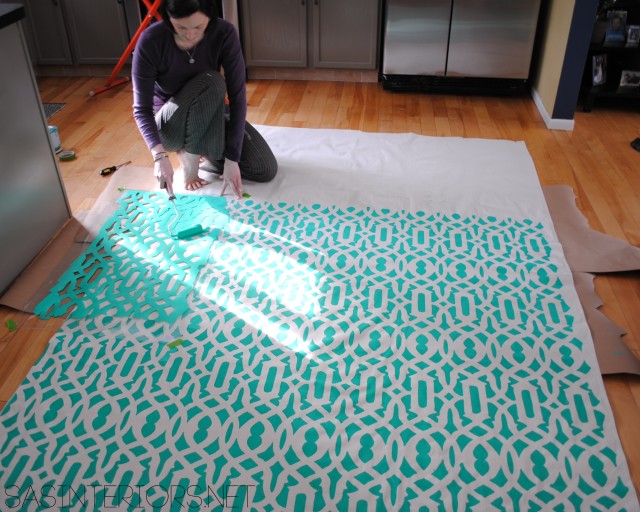 …realized I made a huge boo-boo!Â  At first, I didn’t put anything under the drop cloth and when I went to reposition it, I realized the paint seeped through.Â  UGH!Â  Thankfully it was still damp and the steamer took the paint right off.

Lesson Learned: Put something under your drop cloth before painting! 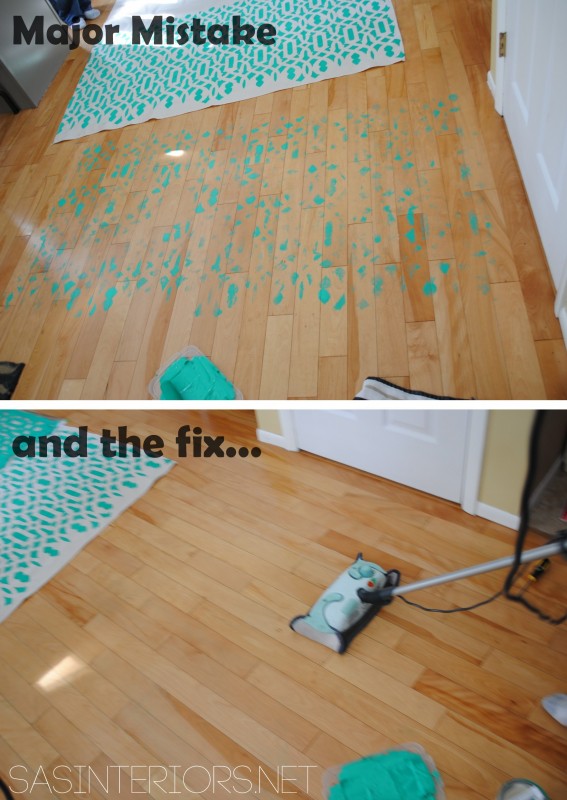 You live and learn!

5. After the debacle, I was back on track!Â  Once all the stenciling was done, it was time to make the large panel into a shower curtain.Â Â  With the 6 end, I took the top edge and rolled it over about 4″ (alittle more or less is fine), and ironed a crease.Â  This edge will create the top part of the shower curtain.

6. Once the crease was created, I took it over to the sewing machine and sewed the edge.Â  Take a look at the graphic for the specific spot to sew – this is important! 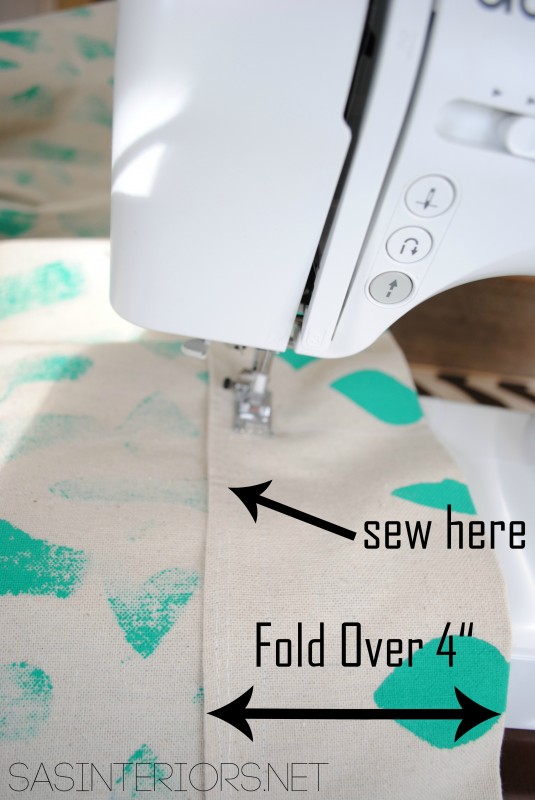 7. Once the edge was sewn,Â  I layed the large panel out on the floor again.Â  I took the 12 ball style shower hooks and equally positioned them along the newly created hemmed edge. 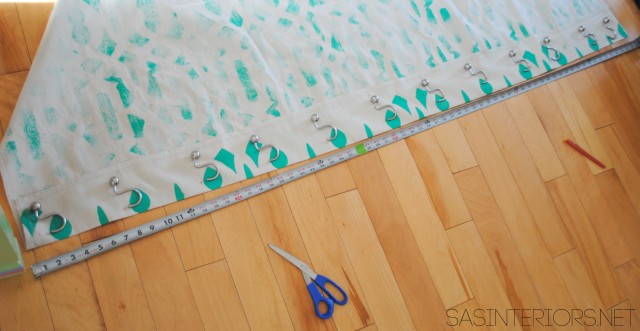 8. I marked the locations of where the ball style hooks layed.Â  Again, make sure they are equally spaced. 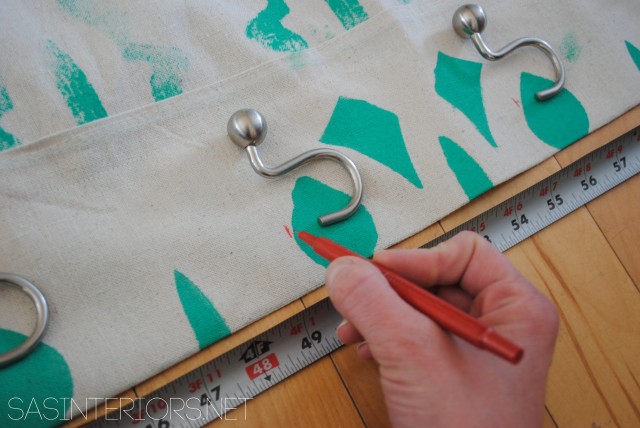 9. Then it was time to create the hole for the ball style hook to fit into. Only trim through the first layer, not through the finished side of the panel. 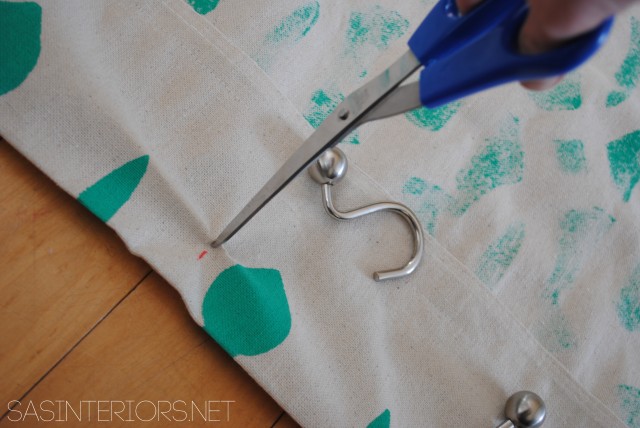 10.Â  Slip the hook into the hole. If you decide to tackle this project, you could create a true button opening so the fabric doesn’t fray, but I took the easy way out and didn’t, hehe. 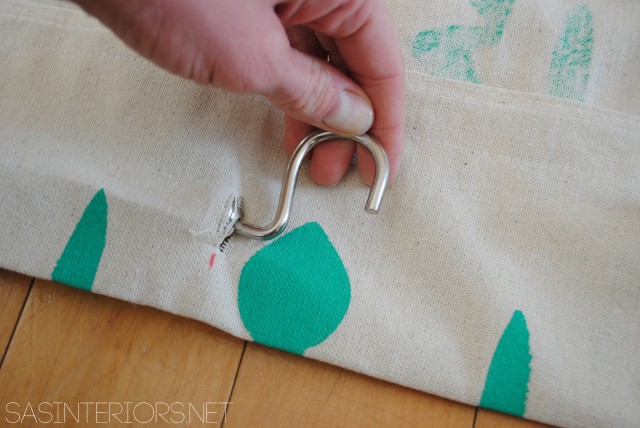 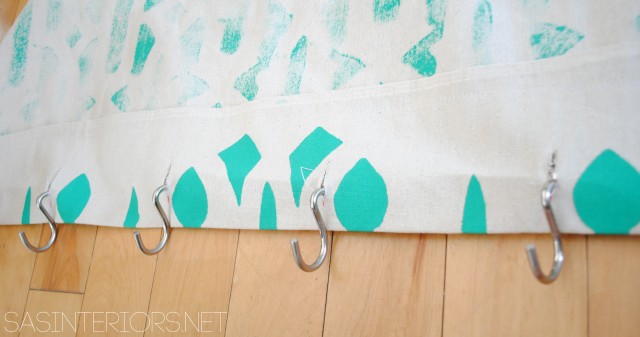 11. Once the hooks were in place, I put the curtain on the shower curtain rod.Â  This was the part of the project where I decided the exact length of my newly created shower curtain.Â  If you remember before, I mentioned I purchased a 9′ long piece of canvas drop cloth, so it definitely needed to be trimmed a bit.Â  Once hung, I put a few pins in to mark the finished length that I wanted. 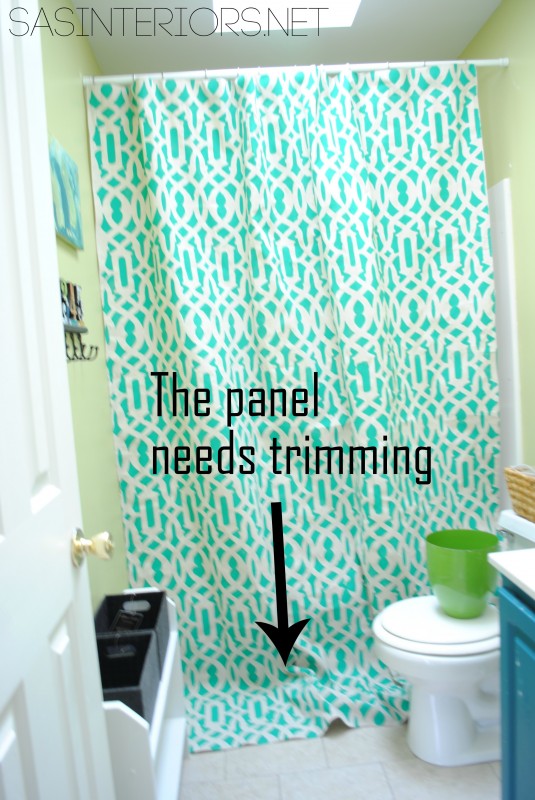 12. Leaving about 4″ extra to create a bottom hem, I trimmed the excess fabric. 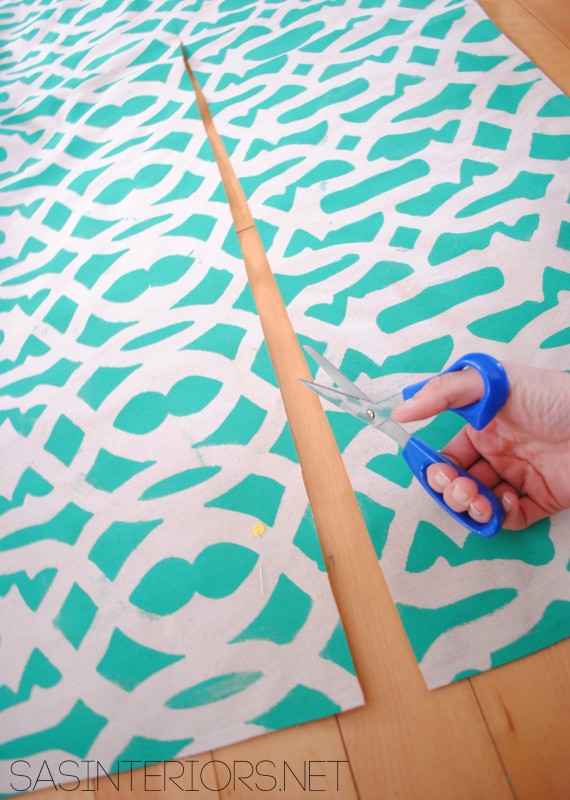 13. Lastly, I ironed and sewed the bottom hem so the crease was at the exact spot that I marked with the pins. 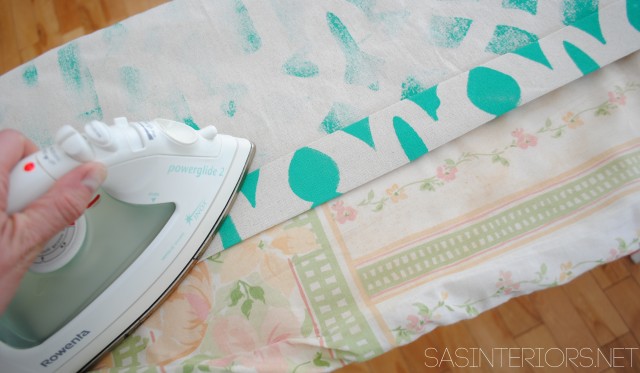 And then it was done!Â  Trimmed, sewn, and sitting high on the wall.Â  Perfecto. 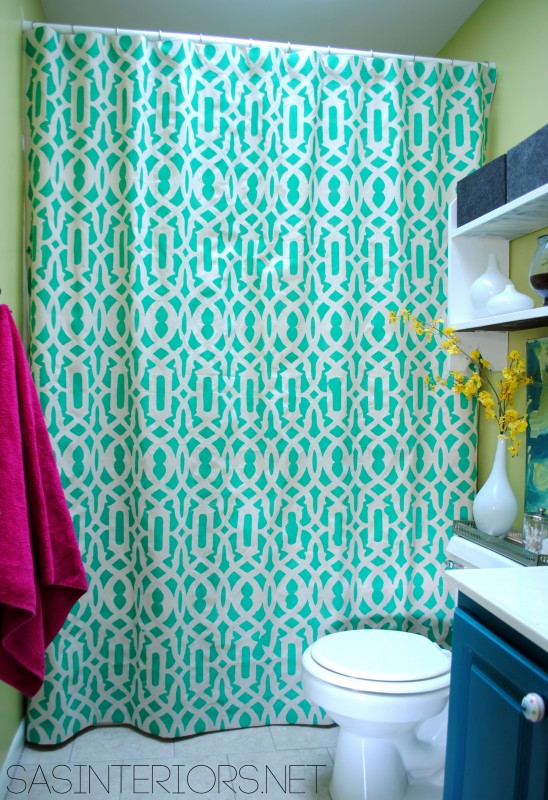 The kids bathroom is right at the top of the stairs so this is the first sight you see. (another reason why I wanted something taller than the typical too-low shower curtains).

It surely is dynamic, fun, and unexpected! 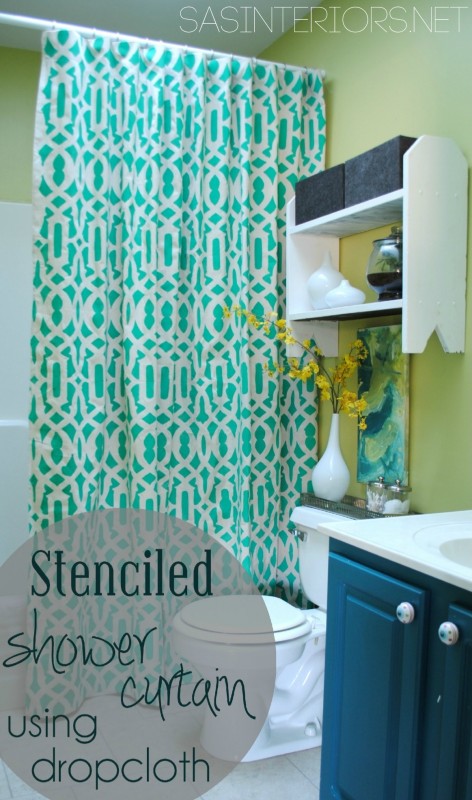 What a breathe of fresh air!Â  Don’t ya think?!Â  Canvas drop cloth is a favorite of mine to work with and I’m thrilled with the outcome of the project.