Last year I had the opportunity to work on a kitchen renovation project with a client and the result was incredible. I recently was asked to return to make some updates to the living room and I’d love to show you the before & after of each space.

The house is very charming & unique with high ceilings, wood beams, and an eclectic aesthetic. 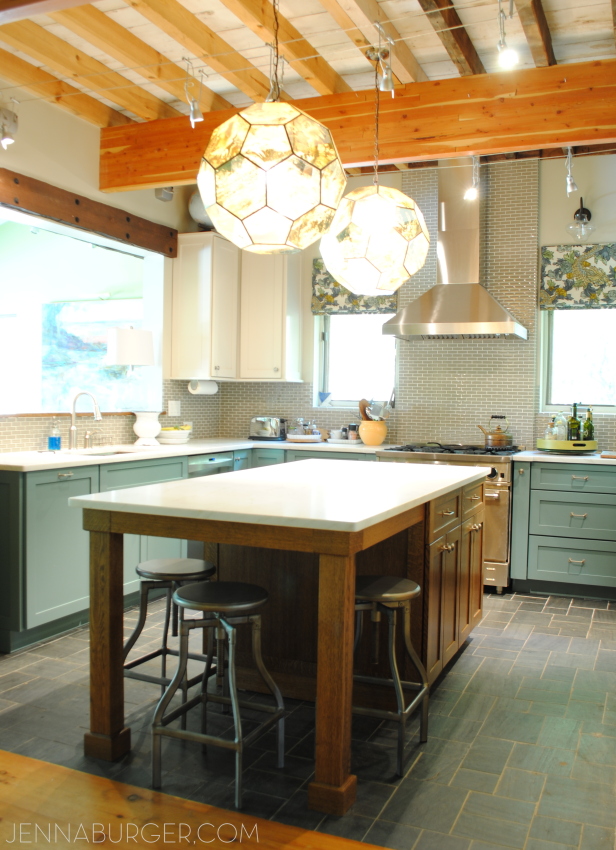 On my first visit to the house to discuss the scope of work with the client, I immediately realized that the kitchen layout was totally wrong. There was so much potential, but the dated cabinets and flow of the space was taking away from it’s true potential + function. The space itself was of a decent size, but the layout with a ying-yang peninsula made the kitchen awkward & tight to maneuver. 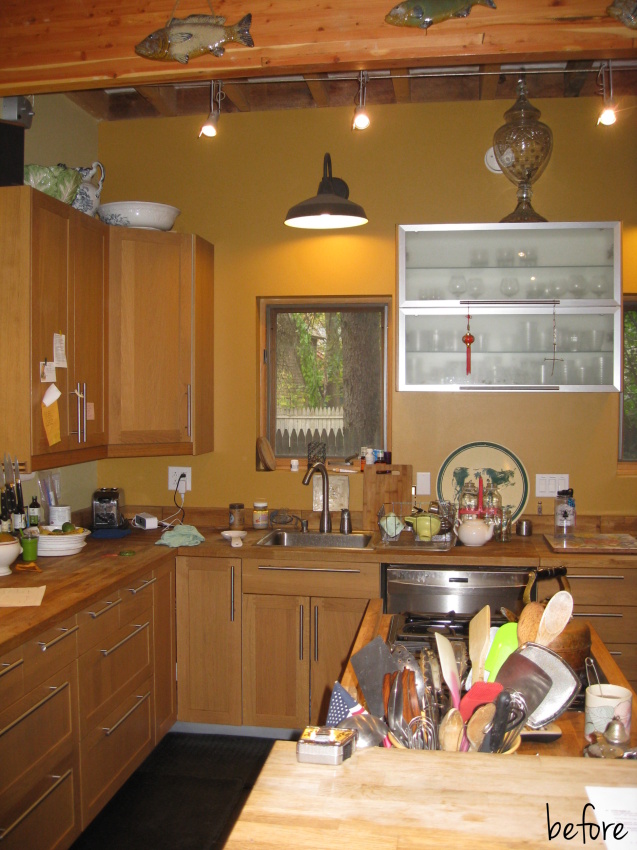 With the kitchen sandwiched between the living room and dining room + with only 2 small windows facing the north, the space was dark and drear – all day the client would leave lights on to make the space look + feel brighter & airier.

Aside from reworking the cabinetry layout, I also needed to figure out a way to bring in light. This space needed it’s moment!!! 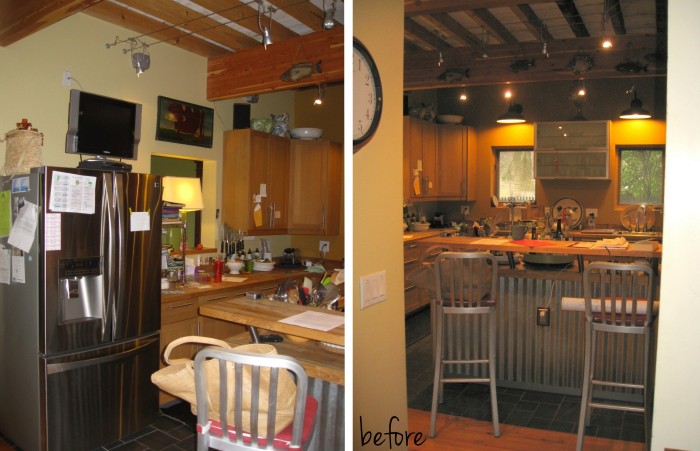 We were originally thinking about painting the existing cabinets, but upon further inspection and confirmation from my cabinet guy about their durability + that we had to reconfigure the cabinets, we realized the painting route wouldn’t be worth the effort + cost, so everything got ripped out!

We chose a new palette with a mix of soft gray, light teal, and quarter sawn oak for the cabinets + a gorgeous danby marble countertop. This was the creative vision board/mood board I created for the proposed kitchen… 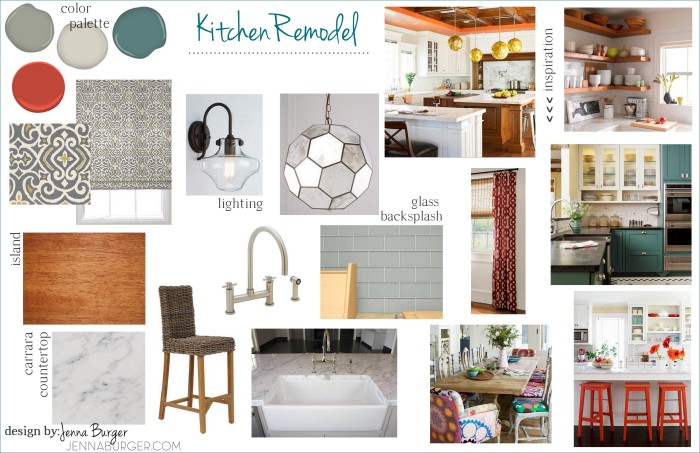 New cabinets were built for the perimeter of the kitchen, the refrigerator was relocated, and the sink + stove were moved to locations that made better sense for the function + flow. 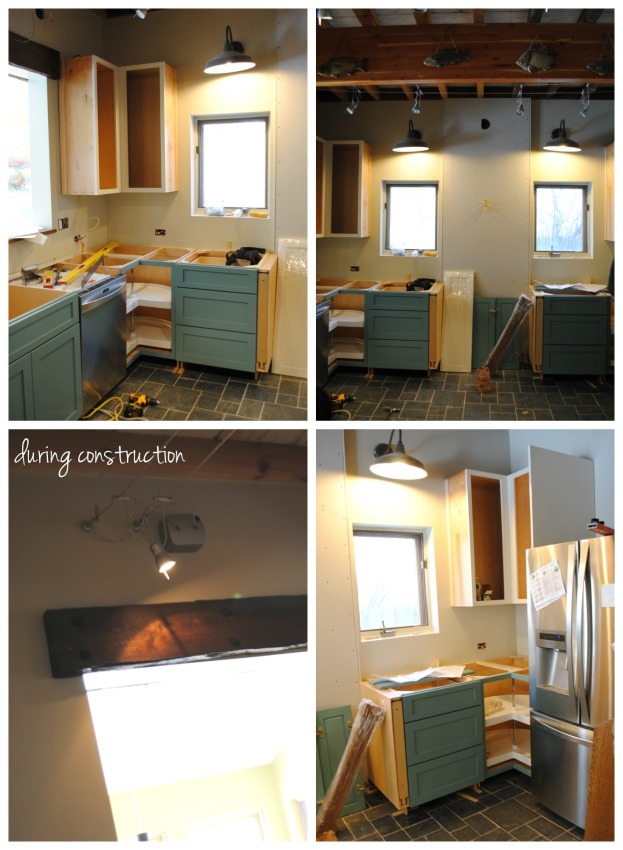 The biggest addition was creating a giant opening between the kitchen and dining room to let the natural light shine through! There was previously an opening pass-through to connect the 2 spaces, but it went from 3′ wide to 9′ wide + 2′ higher.

We also added a faux beam above the opening which ties in to other door openings in the home. Continuing the style + making new look cohesive with the existing is very important! 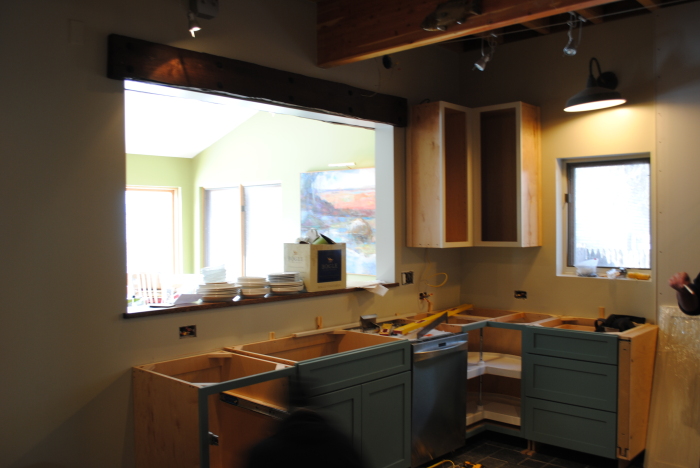 The center peninsula that made the ‘before’ kitchen like a maze was eliminated and in it’s place we decided on a big island that houses the microwave & lots of cabinetry storage. The island countertop was extended to create a seating spot for stools.

So it went from this to this… 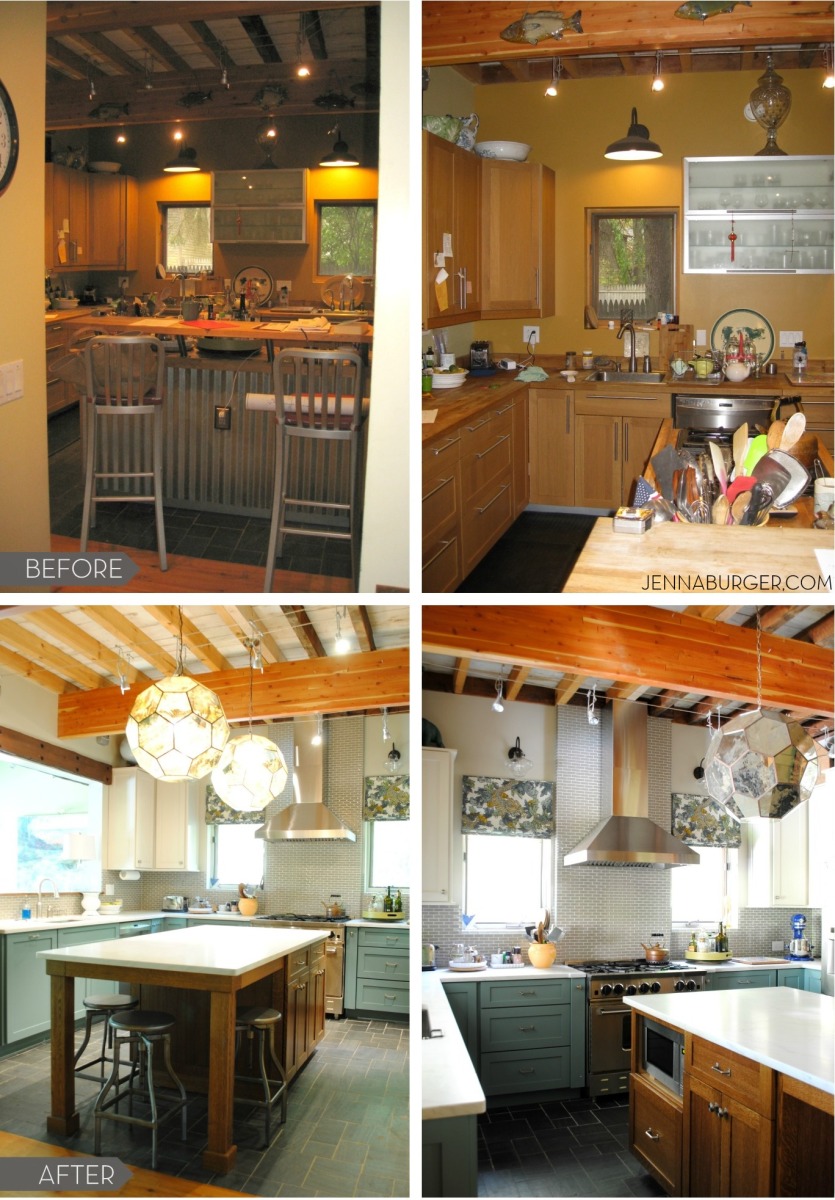 It’s difficult to even believe you are looking at the same space, pretty much from the same angle. Here are more ‘after’ shots. 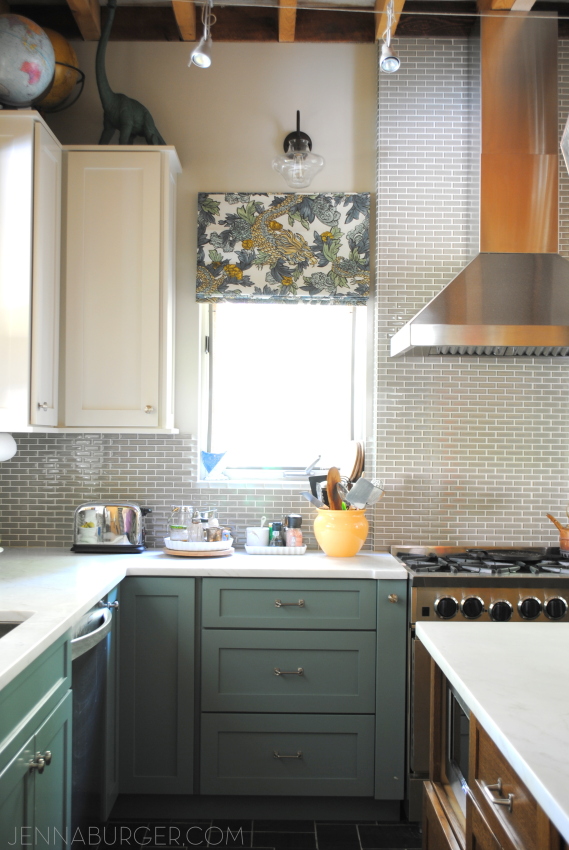 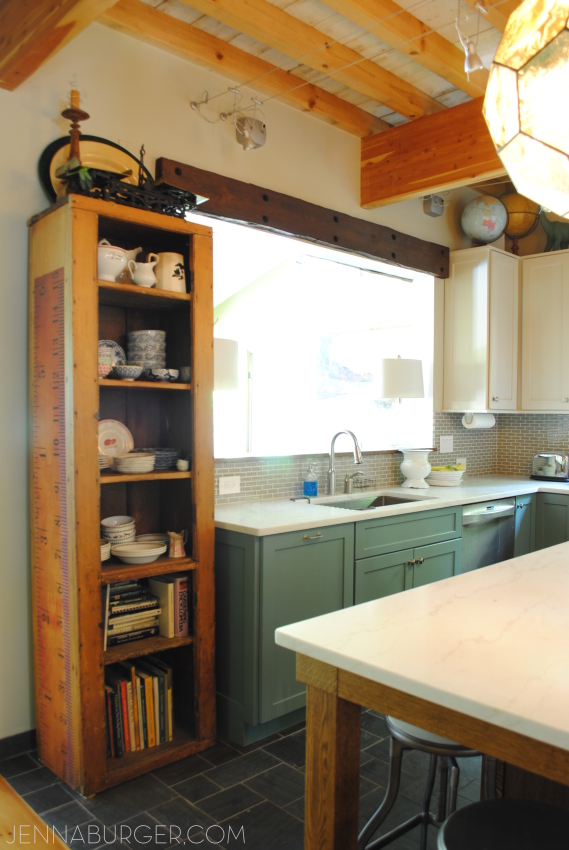 A smaller sized rectangular glass tile in a gray/blue hue was chosen for the backsplash and continues up to the ceiling behind the hood. The section of wall behind the commercial-style range + hood was built out about 6″ to give the wall more depth and prominence. 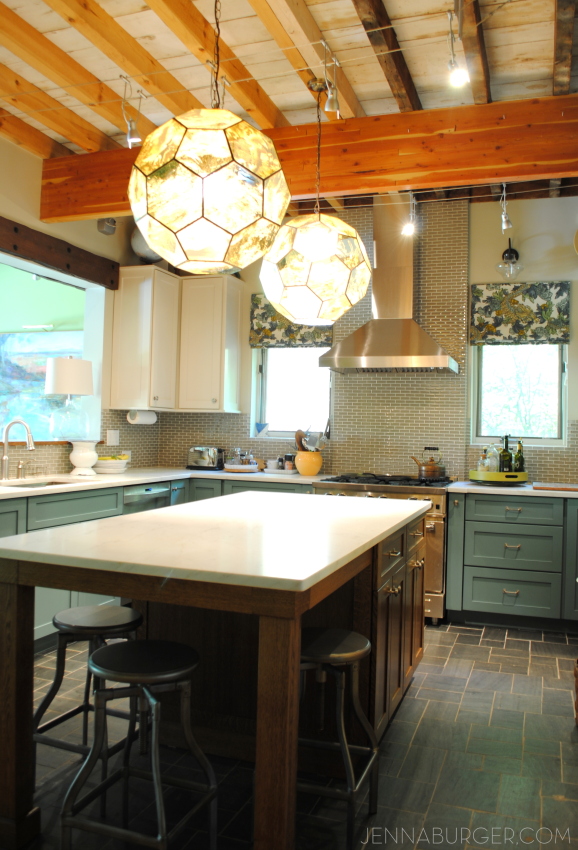 New sconces were installed above the existing windows & new roman shades were hung high on the wall to give the appearance of a taller window.

It is incredible how much brighter this space is with the lighter hues on the walls + cabinetry & the new larger opening. 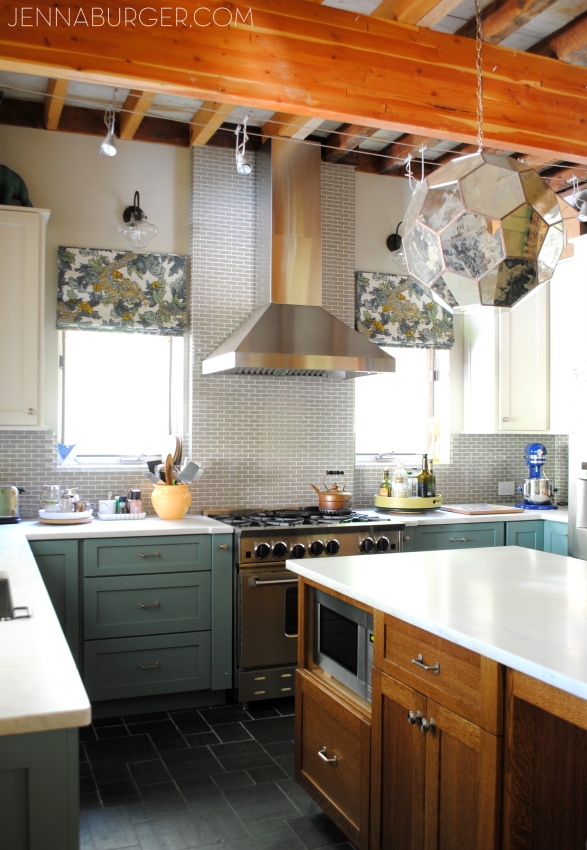 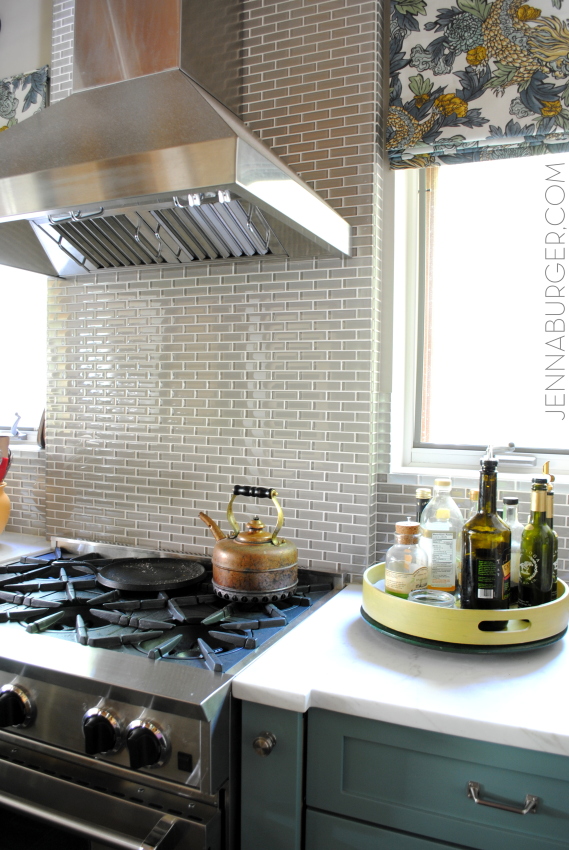 Shelving storage was a must for this kitchen and when it was decided to close up a small passageway between the living room and kitchen, it allowed space for shelves. The shelves are 1.5″ thick and made of quarter sawn oak, which has the most gorgeous grain. The refrigerator now sits on this side of the kitchen – a spot that is much less dominant. 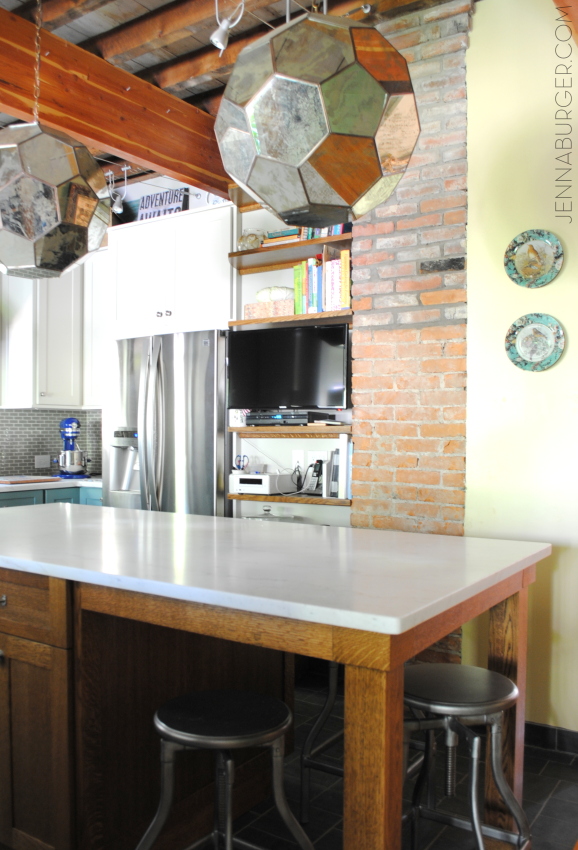 Let’s talk about the island lights since they’ve been in almost every picture. Aren’t they spectacular?!

The pendants are overly large – YES, but this space needed it. The ceilings are high (over 12′) & the kitchen space is big, and there is nothing more near & dear to my heart than adding drama with lighting. These show-stoppers make the kitchen. The space would have been okay without, but they give it the edge needed to stand out & be dramatic!

Way back a long time ago, I shared a sneak peek of these lights on IG & many of you loved them too. The lights are from Shades of Light but unfortunately aren’t available anymore – sorry. 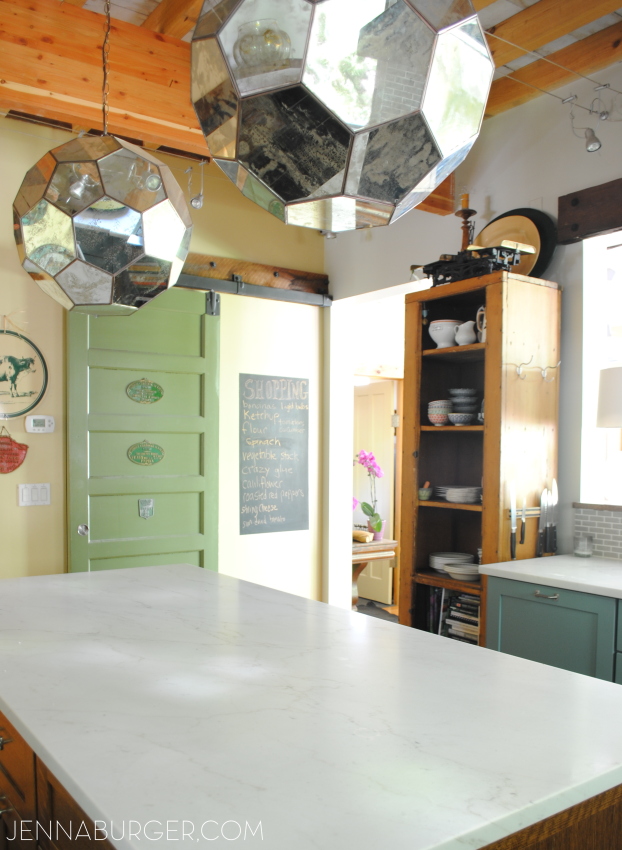 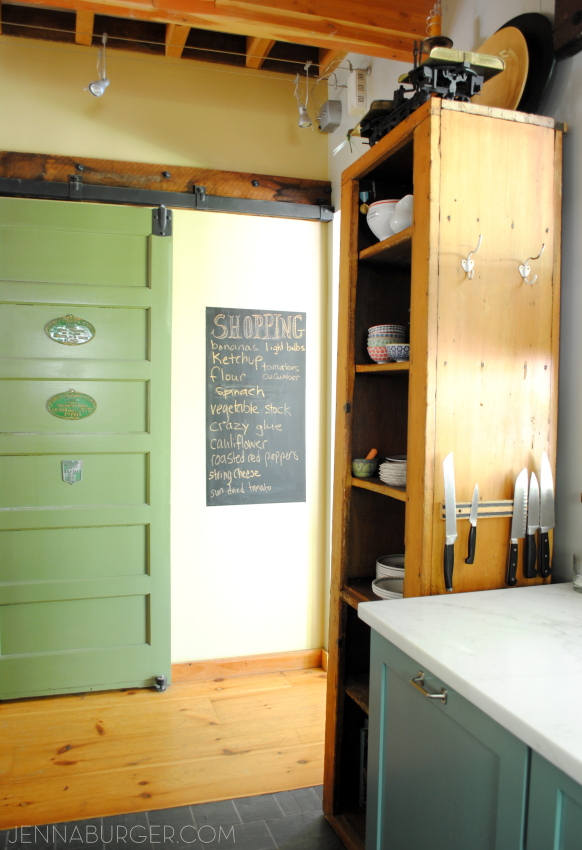 The view from the dining room looking into the kitchen… 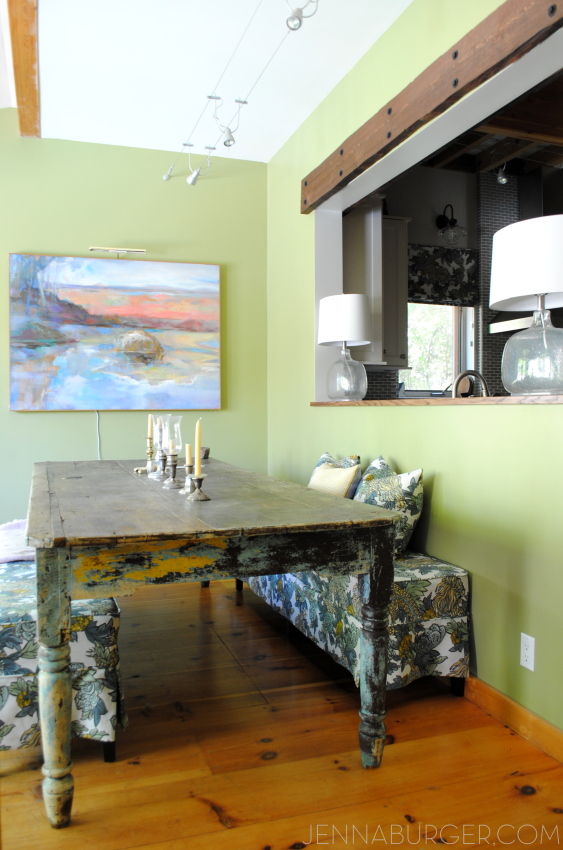 On to the living room, the room we recently worked on & wrapped up just a few weeks ago.

The living room has the same high ceilings with cable lighting above, wood flooring, and an eclectic style. The space was challenging the client because the layout (again) of the furniture wasn’t working. The room is not a stand-alone living room, but is the space where you enter in from the front door, the traffic flow that connects to the second floor, and the only real spot for reading + “hanging out” in (which = a need for ample seating). A better layout with more function was needed!

The wall that began with one mirror, now holds a dozen. Stairs can be challenging, so this eclectic mix of mirrors in varying sizes that reflect the light shining through from the windows opposite the wall, was the perfect solution. 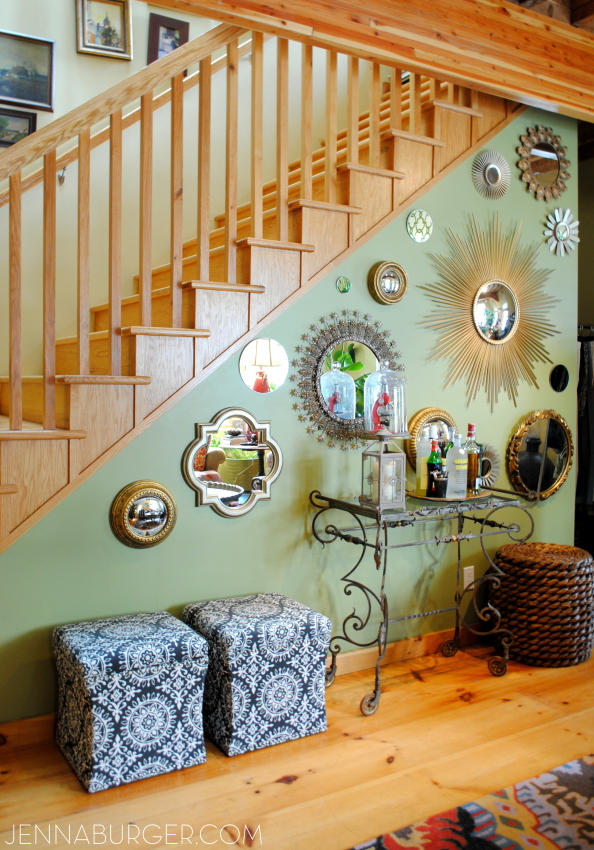 The revamp for the living room was a mix of reusing the old, refurbishing the worn, and layering in some new.

The settee, which the client had mixed emotions about keeping, was given new life when we chose a new vibrant colored rug for it to sit on. Then layers of new pillows were made in fabrics of bright hues including blue, red, orange, and green to give a pop of color & warmth.

One of the many challenges in this space were the windows. There were 4 windows with differing heights, so to tie them together we decided on a common height and had new roman shades made in a geometric pattern of green & white. 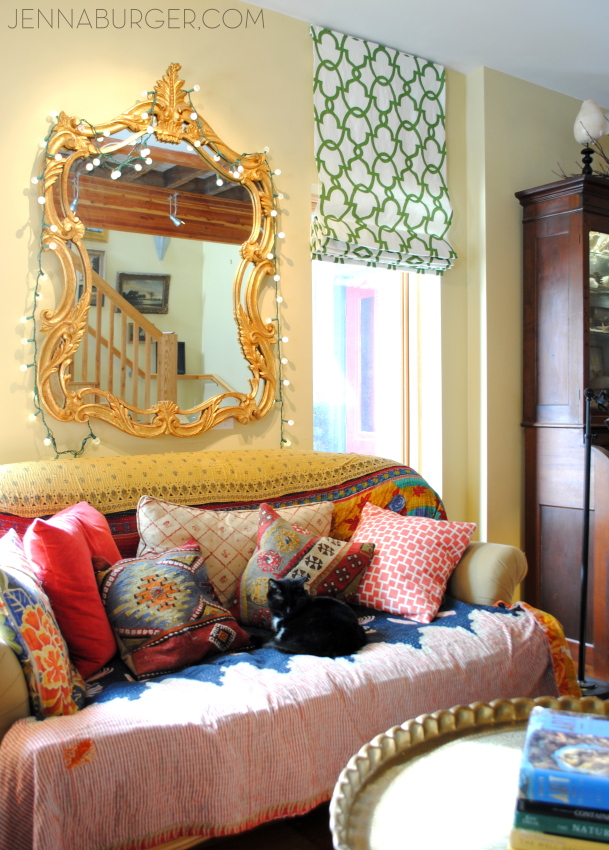 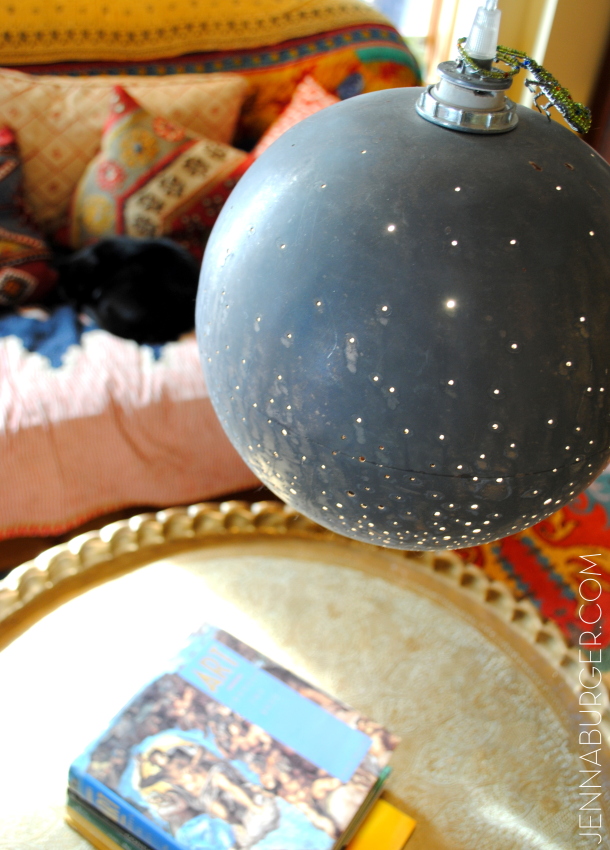 It’s amazing how this room feels + functions so much better now by simply rearranging the furniture and adding in new layers – a rug, pillows, lighting, mirrors, etc. It truly is a relaxing + inviting space that I would personally love to just sit, read, and soak-up-the-sun in all day. 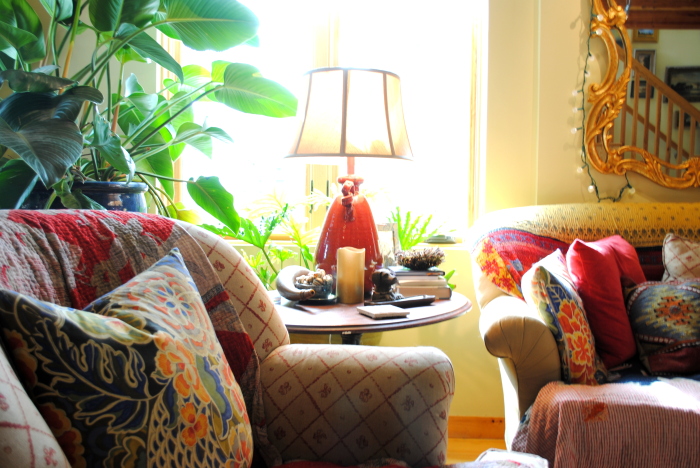 A chair that had been covered with blankets because the fabric was torn underneath was recovered in a deep navy velvet fabric and is now Oh So luxurious! 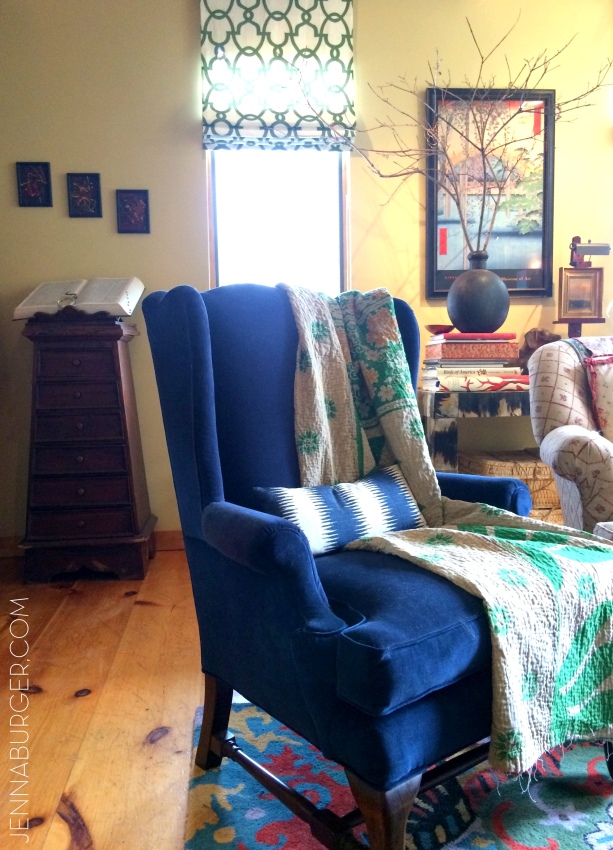 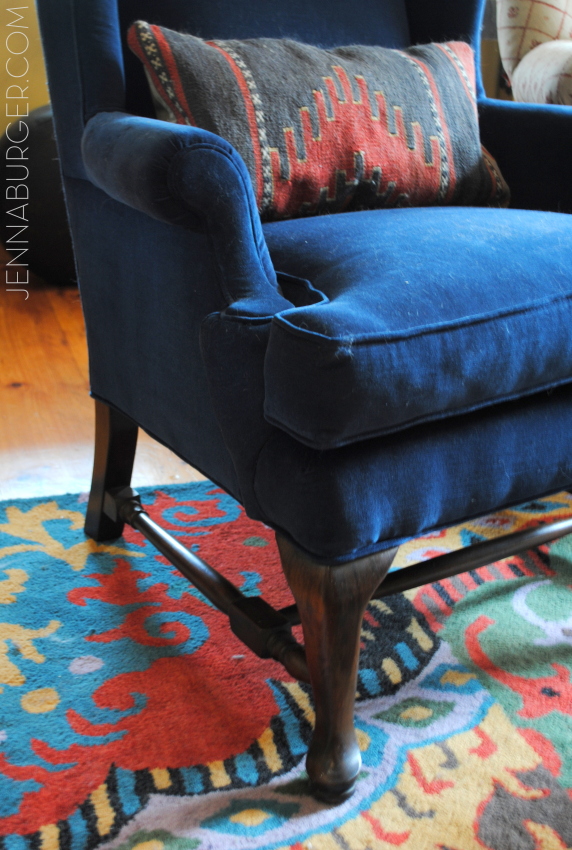 We also brought life back to another chair in the room by reupholstering it in a fun Ikat pattern of navy + white. 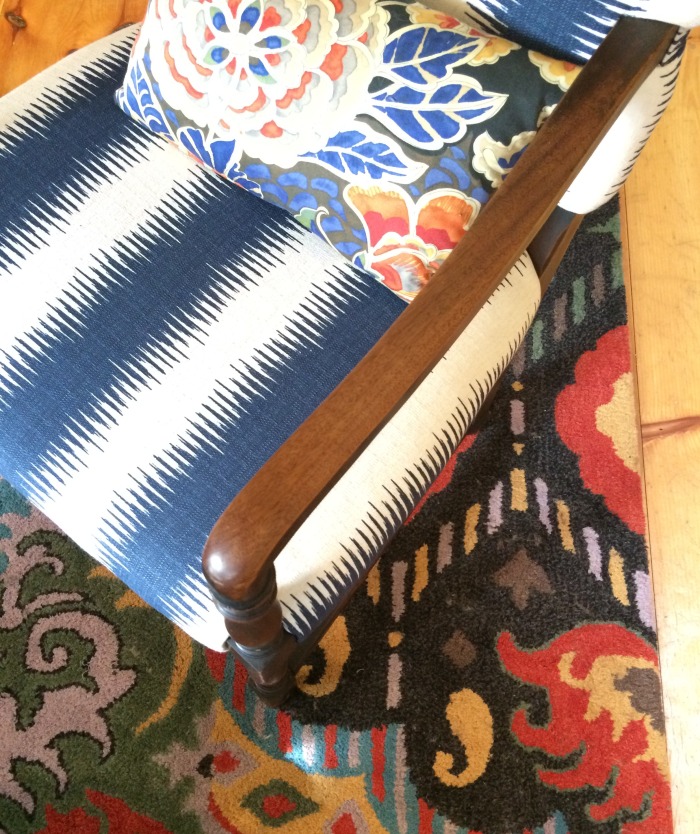 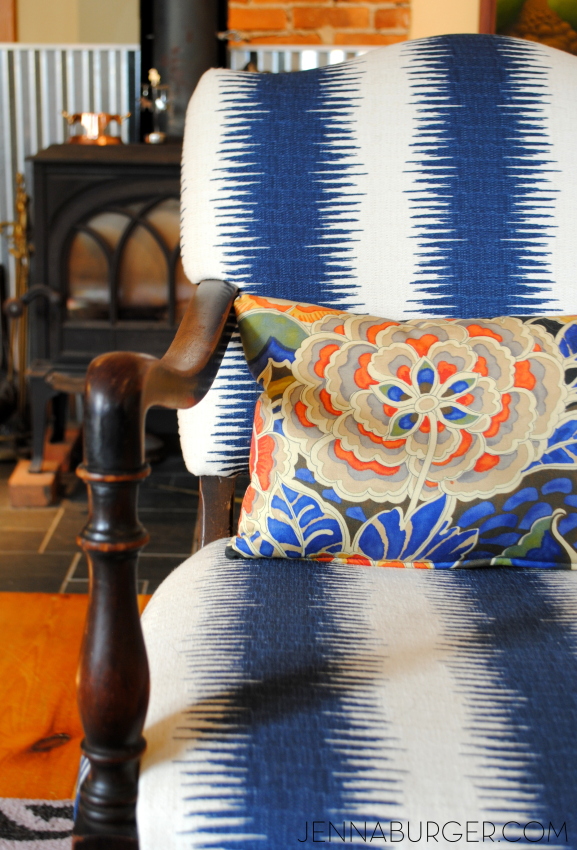 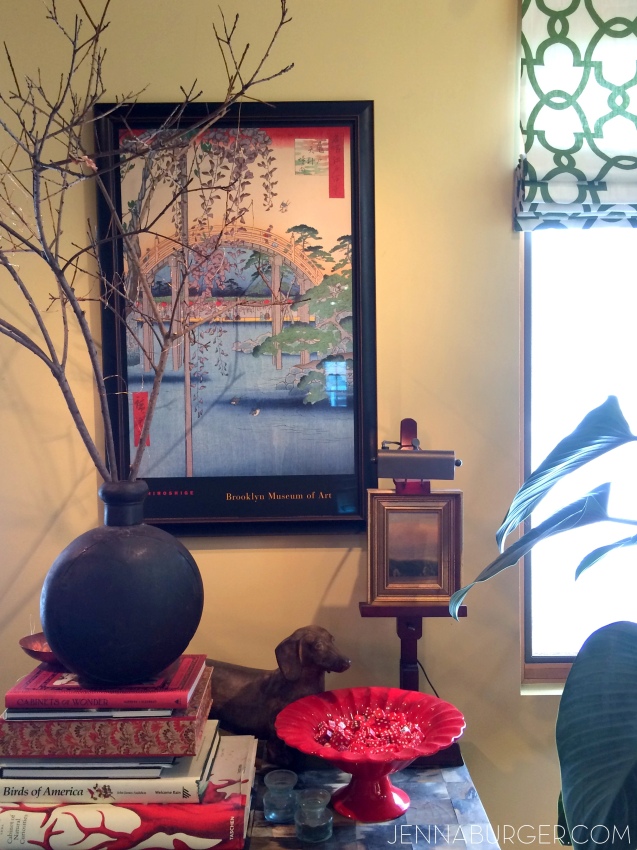 I adore the result of these beautiful new rooms (especially the kitchen), and I hope you did too! Thanks for taking time out of your day to take the tour ;)